Okay… slow going in the woodworking department at my house.  I built the basement workbench a while back, then realized that if I was going to be working with tools that make a lot of sawdust, and chemicals that can explode, it probably wasn’t the best idea to be doing so in an enclosed basement about 20 feet away from the furnace.  Still, its good to have the workbench down there for things that won’t explode the house.  Explosions are bad.

Next step: I’ve been looking at a lot of plans for folding workbenches that I can put against the garage wall and collapse when I’m not using it.  That way I have the ventilation of the garage, a nice surface to work on (I’m thinking 6′ wide by about 3 1/2 deep) and it gets out of the way of the cars, snowblower, lawnmower, etc when I’m done.  I finally settled on the DIY Folding Workbench by April Wilkerson at WilkerDos.com.  I didn’t purchase her plan (Sorry April!) but instead tailored it to my garage and got  a ton of practice modeling in SketchUp while I was at it.

A friend of mine is a shop teacher at the local school, and a contractor off-hours, so when I told him my plans he said to count him in!  I think he got as excited as I was about the project… he was talking about going shopping for the parts with me, and seemed to be looking forward to spending some time “making sawdust”. 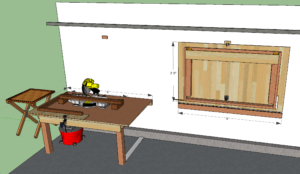 Here is a rendering from SketchUp, showing 2 views of the bench: open for use, and folded against the wall.  It took a bit of tinkering to get the position and dimensions of the surface correct so it would sit at a good height, not bump into the garage door railing, etc.  It probably would have been much simpler for an experienced woodworker, but remember… I’m new at this!  Anyway, I debated all sorts of fancy options for the surface, like finding an old solid wood door, or inlaying T-Track to clamp and guide my tools, even buying a pre-made workbench surface with all those features built in.  I finally came back to the realization that I’m not going to build a bench to make my contractor friend jealous on my first try out.  Just make the bench and upgrade later as I get more skills.

Now I just need to find the time to actually build it… I’ll update this post when I do.

Here’s the 3D view of my SketchUp model – one version of the bench collapsed against the wall, and another of it open. Click on the thumbnail below to enter 3D mode. Fullscreen button is in the bottom right corner, and tools expand from the right edge.