I live in a development with a LOT of trees… mostly oak, maple and poplar, which means a lot of leaves on the ground.  The property is just under 3/4 of an acre, but we’re lucky to be in a town that picks up leaves at the curb.  That still means getting the leaves up there, though!

The first year in this house, we hired a contractor to take care of the leaves.  Handy, but expensive.  The second year I bought a battery-powered blower.  Small, light and easy to use… but no umph behind it, and the battery barely lasted long enough to do the front path and the driveway before it died.  One day I was using that little toy, running back and forth to recharge it while I did more leaves the old fashioned way, with my handy rake.  Then the rake broke.  Brand new rake, first day, the handle snapped in two.  So I tried to mow the leaves, hoping the suction from the mower would pull up the chopped leaves.  (Remember, this is my first real house… I lived in a townhouse before this!)  No such luck… it just made leaf confetti in the lawn.  My next door neighbor saw the epic struggle for leaf dominance going on in my yard and came over with his backpack blower.  It made short work of the leaves, and I made a new friend.  Next day – I bought a backpack blower!

Well, a beginner’s version of a backpack blower at least.  It was certainly more powerful than the battery blower, and refilling the tank sure beat plugging the battery in for an hour.  Still not a lot of power though, compared to the ever-growing field of leaves I call a lawn.  The first syllable in TRIUMPH may be “TRY” but the second syllable is “UMPH!”  I used that blower for 2 years, usually supplementing the lack of power by holding the battery-powered toy in my off hand and using both blowers at once like some John Woo movie set in Suburbia. 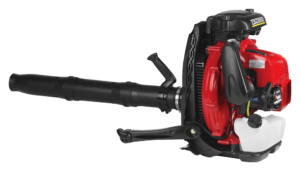 This year, I chose to win the war on leaves.  We had a landscaper overhaul the garden and drop some mulch, so I asked him what he suggested for a blower.  With a laugh, he said “Yeah, I saw that little guy hanging in your garage… guess that’s not working out?”  He pointed me to a store he uses about 30 minutes away, and recommended the RedMax 8500.  At an idle, it was about as powerful as the battery blower.  At 50% throttle, it was out-performing the little backpack.  At full throttle, I felt like a lawn superhero!  One review I read on Amazon said something to the effect of “It blows grass clippings, leaves, small animals…”  It wasn’t kidding.  I bet I could get a squirrel airborne with this monster!  My only complaint is that is does get thirsty so I have to refuel more than expected, but that’s a small price to pay for being a lawn superhero.